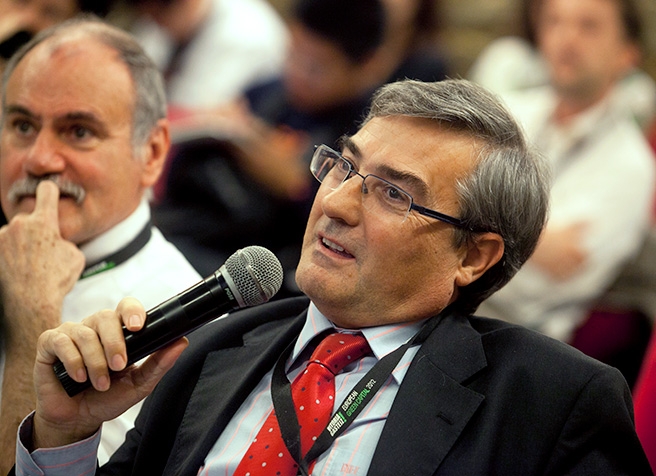 He is co-author of over 550 articles with more than 20200 citations and an h-index of 64. He has co-authored twelve book chapters and is co-editor of two books. He has also published several reviews requested by different international journals of high impact factor such as Energy & Environment Science (IF=30.067), Chemical Review. (IF=52.63), Acc. Chem. Res. (IF: 22.323) and Adv. Energy Mater. (IF =21.875), this last coedited by Prof. Rojo. He is co-author of eight patents related to magnetic and energy materials. Of special note is the PCT patent obtained about the first nanohybrid polymer electrolytes for lithium and sodium ion batteries.

In 2010 he was appointed Scientific Director of CIC energiGUNE focusing his research on the study of materials for lithium batteries and beyond, to improve power and energy density both by exploring new compounds, optimized microstructures and by studying the mechanisms that govern their performance.

He holds different positions in various scientific bodies in Spain being the chairman of the Solid-State Chemistry Group within the Spanish Royal Society since 2000 until 2010, and advisor for the Minister of Sciences and Education of the Spanish Government. He was awarded with the National Prize in Inorganic Chemistry by the Spanish Royal Society of Chemistry (RSEQ) in 2013. In February 2015, he was appointed as an Academic Member of the Royal Spanish Academy of Exacts, Physical and Natural Sciences. From 2014 to 2016 he was an executive board member of the EuCheMs Solid State and Materials Chemistry division and in 2016 he was appointed as a Member of the Working Party on Chemistry and Energy of EuCheMS (European Chemical Science), European Association for scientific discussion in all fields of chemistry related to energy applications.

Cookies on this website are used to personalize content and advertisements, provide social media features, and analyze traffic. You can get more information and configure your preferences HERE

To see this video you must accept marketing cookies, it can be configured here